Using online social media, to give and receive support, has evolved for me through a disorientating real world journey of ill-health which has thrown into question every aspect of my life. My online life has evolved as my needs and networks have changed. This blog is an exploration, a glimpse back over my shoulder and a glance at the maps.

A year ago, when things were beginning to get very confusing, I was using email, Twitter, text messaging, Instagram and Facebook. Since then I have added Whatsapp, Facebook forums and Facebook messenger to this list. My joints and eyes were the initial targets for my disease (granulomatosis with polyangiitis, GPA, a form of vasculitis). This made using screens and keyboards challenging so I varied which device I used, and kept sessions short, important because of the systemic effects of the disease which made me very tired. But I didn’t know then what was wrong: all I knew was my world was rapidly becoming restricted. This made Facebook particularly irritating. Photographs of people enjoying holidays and nights out became difficult to take in. I’d always restricted Facebook and now I moved the icon to a different window so I had to decisively swipe to see it.

At work, the volume of email was an issue. When I returned to work after sick leave, I did a massive session of unsubscribing which was very satisfying. Now, to further reduce the volume of email, I ring people up if I can’t see them in person. I use the online calendar for scheduling meetings. Email is slowly reducing to being a tool for sharing information and confirming what has been agreed. At home I send an information email out to friends and family every few weeks, and enjoy the responses. I speak to people on the phone when I can as it feels more supportive, using my headphones when my joints are bad.

I had to decide how to disclose my diagnosis online. I had been using Twitter to share my experiences of the different clinics and tests, and continued this. As a health professional, I had many conflicting feelings about receiving NHS services, especially when I felt vulnerable and unwell. But I haven’t put my illness life on Instagram – there may well be a community there, but I like Instagram as a kind of online soothing and intriguing gallery. I decided to share my news on Facebook to reach friends and family who did not use other social media. My daughter suggested posting a nice photograph alongside my news, so that people could “like” my post without appearing to like the fact I was sharing bad news.

I searched on Facebook for a specific forum for my disease, which is also known as Wegener’s Granulomatosis. The disease is rare and I had never encountered anyone else with it, so it was fascinating to meet others. But then it became quite frightening. Many members were based in the USA and I realised their experiences were particularly difficult because of the healthcare system there. It was also a very lightly moderated forum and some of the information shared seemed inappropriate. Slowly I switched my allegiance to the Vasculitis UK Facebook forum, which is much more actively moderated. There are still scary stories and it can be upsetting to hear of people’s struggles, but it is somewhere I can be open about my experiences knowing people will understand. I am learning so much too: partly from being prompted to retrace my steps through the information I have been given by my consultant, as slowly the realities sink in. 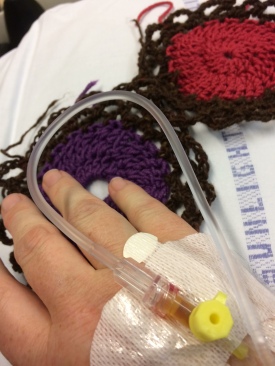 Most recently I’ve been using Facebook messenger, encouraged by local friends who I actually see in person. Yes, more real people! It is a bit like Whatsapp to me which I find very useful. Initially my children got me to use Whatsapp to organise arrangements for my chemotherapy sessions. My work colleagues were an extraordinary support via Whataspp for those sessions, posting photographs and messages throughout the long days. Again, photographs were particularly helpful: one close friend posted simple images of flowers in her garden which were a welcome distraction in the infusion ward. In return I posted short films capturing the strange sounds and sights of the ward, carefully avoiding people and focusing on the infusion machines. It’s bad enough being there without having other people taking photos of you!

In the early days I restricted my screen time,  so I asked people to send me cards in the post with their news and these cards are very special to me. To see a card on my doormat is a particular joy: I can’t wait to see who it is from. Now I am back at work I have less time to respond, but for a while making cards and writing responses became a useful thing to do. The cards also seem to be a way for people to say things they might not say on social media: really helpful personal messages urging me to keep strong and to keep going. Sometimes I really need to hear that.

I continue to receive much support from a wide network. It’s essential. But it’s also essential for me to be able to give support, too. I resent the idea that this could be reduced to a transaction or exchange: it’s more complicated. My neighbour, who has been walking my dog for me, told me she did not expect anything in return: she was going out with her dog anyway. Many people had supported her in the past, through difficult times, without expectation of her returning the favour. Pass it on, she said. But I have been enjoying exploring how I can support her, as a friend and neighbour, and sustain our connection. For the online communities I belong to, I hope there is a similar process going on: it’s more difficult to tell, but I look out for the signs. Maybe we could be more aware of these supportive aspects of online social media.